“The U.S. Supreme Court Decision … Means the Nation Has Entered a Post-Constitutional Era
Posted on May 5, 2014 by WashingtonsBlog 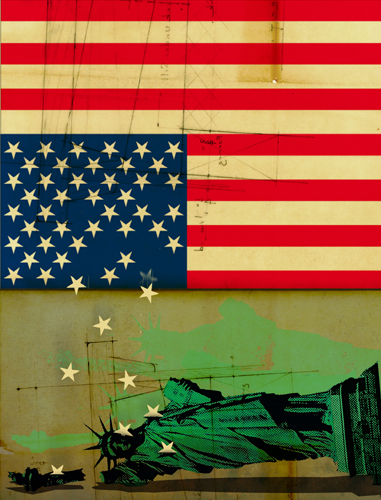 “We Are No Longer a Nation Ruled By Laws”

The trial judge in the case asked the government attorneys 5 times whether journalists like Hedges could be indefinitely detained simply for interviewing and then writing about bad guys.

The government refused to promise that journalists like Hedges won’t be thrown in a dungeon for the rest of their lives without any right to talk to a judge.

The trial judge ruled that the indefinite detention bill was unconstitutional, holding:

This Court rejects the government’s suggestion that American citizens can be placed in military detention indefinitely, for acts they could not predict might subject them to detention.

But the court of appeal overturned that decision, based upon the assumption that limited the NDAA to non-U.S. citizens:

We thus conclude, consistent with the text and buttressed in part by the legislative history, that Section 1021 [of the 2012 NDAA] means this: With respect to individuals who are not citizens, are not lawful resident aliens, and are not captured or arrested within the United States, the President’s [Authorization for Use of Military Force] authority includes the authority to detain those responsible for 9/11 as well as those who were a part of, or substantially supported, al-Qaeda, the Taliban, or associated forces that are engaged in hostilities against the United States or its coalition partners—a detention authority that Section 1021 concludes was granted by the original AUMF. But with respect to citizens, lawful resident aliens, or individuals captured or arrested in the United States, Section 1021 simply says nothing at all.

The court of appeal ignored the fact that the co-sponsors of the indefinite detention law said it does apply to American citizens, and that top legal scholars agree.

The court of appeal’s Orwellian reasoning may sound – at first blush – like it might be a good thing. After all, the court said there’s no indication that the indefinite detention provision will be applied against U.S. citizens.

However, by refusing to strike down the law and insist that any future laws explicitly exempt U.S. citizens, it leaves discretion in the hands of the executive branch.

The effect of the decision will be to allow the U.S. government to kidnap and indefinitely detain U.S. citizens who protest or dissent against the government … and the courts will never hear any legal challenge from the prisoners. The detainee will not get to say:

The courts said the indefinite detention law isn’t written to apply to U.S. citizens, so you have to let me go!

And he won’t get to say:

You’re confusing me with another John Smith, and I can prove it!

After all, prisoners can be held under the indefinite detention bill without trial, without being allowed to present evidence or hearing the evidence against them, without letting the citizen consult with a lawyer, and without even charging the citizen with any crime.

So – if you’re thrown into a hole somewhere – no one will even hear your story.

If [the indefinite detention law] stands it will mean, as [the trial judge] pointed out in her 112-page opinion, that whole categories of Americans—and here you can assume dissidents and activists—will be subject to seizure by the military and indefinite and secret detention.

No matter what the Obama administration may say to the contrary, actions speak louder than words, and history shows that the U.S. government is not averse to locking up its own citizens for its own purposes. What the NDAA does is open the door for the government to detain as a threat to national security anyone viewed as a troublemaker. According to government guidelines for identifying domestic extremists—a word used interchangeably with terrorists, that technically applies to anyone exercising their First Amendment rights in order to criticize the government.

As does constitutional attorney William Olson:

The personal freedoms of Americans are now in tatters following the refusal of the U.S. Supreme Court to hear an appeal to knock down the National Defense Authorization Act, constitutional and election law attorney William Olson says.

“This is a rather remarkable shredding of the Bill of Rights,”…. he explained that the language of the act is so “loose,” that anybody can be picked up for any reason.

“The president of the United States … [has] this power to detain indefinitely without charges, without trial, without an arrest warrant, without a grand jury, just to be able to hold someone who they think might be a threat of some sort,” Olson said.

“How are you going to challenge it when the black SUV rolls away from your house and no one even knows where you’ve been taken?”

If you think they’re crying wolf, just remember that the CIA director relabeled “dissidents” as “terrorists” in 1972 so that he could continue spying on them … and nothing has changed.

Daniel Ellsberg notes that Obama’s claimed power to indefinitely detain people without charges or access to a lawyer or the courts is a power that even King George – the guy we fought the Revolutionary War against – didn’t claim. And former judge and adjunct professor of constitutional law Andrew Napolitano points out that Obama’s claim that he can indefinitely detain prisoners even after they are acquitted of their crimes is a power that even Hitler and Stalin didn’t claim.

Access to justice is already being severely curtailed in America. Even when the prisoner is afforded a trial, it is becoming more and more common for the government to prosecute cases based upon “secret evidence” that they don’t show to the defendant, his lawyer … or sometimes even the judge hearing the case. The government uses “secret evidence” to spy on Americans, prosecute leaking or terrorism charges (even against U.S. soldiers) and even to assassinate people. And see this and this. Secret witnesses are being used in some cases. And sometimes lawyers are not even allowed to read their own briefs. Indeed, even the laws themselves are now starting to be kept secret.

But prisoners under the indefinite detention bill have it much worse: they don’t get any trial or opportunity to talk to a judge, any access to a lawyer … or perhaps any information about what they’re even accused of doing or why they were nabbed in the first place.

The U.S. Supreme Court decision … means the nation has entered a post-constitutional era. It means that extraordinary rendition of U.S. citizens on U.S. soil by our government is legal. It means that the courts, like the legislative and executive branches of government, exclusively serve corporate power—one of the core definitions of fascism. It means that the internal mechanisms of state are so corrupted and subservient to corporate power that there is no hope of reform or protection for citizens under our most basic constitutional rights. It means that the consent of the governed—a poll by OpenCongress.com showed that this provision had a 98 percent disapproval rating—is a cruel joke. And it means that if we do not rapidly build militant [Washington’s Blog believes in non-violence] mass movements to overthrow corporate tyranny, including breaking the back of the two-party duopoly that is the mask of corporate power, we will lose our liberty.

“In declining to hear the case Hedges v. Obama and declining to review the NDAA, the Supreme Court has turned its back on precedent dating back to the Civil War era that holds that the military cannot police the streets of America,” said attorney Carl Mayer, who along with Bruce Afran devoted countless unpaid hours to the suit. “This is a major blow to civil liberties. It gives the green light to the military to detain people without trial or counsel in military installations, including secret installations abroad. There is little left of judicial review of presidential action during wartime.”

The law went back on the books [after the court of appeal reversed the trial judge’s decision]. My lawyers and I surmised that this was because the administration was already using the law to detain U.S. citizens in black sites, most likely dual citizens with roots in countries such as Pakistan, Afghanistan, Somalia and Yemen…. Government attorneys, when asked by Judge Forrest, refused to say whether or not the government was already using the law, buttressing our suspicion that it was in use.

In refusing to hear our lawsuit the courts have overturned nearly 150 years of case law that repeatedly holds that the military has no jurisdiction over civilians.

The goals of corporate capitalism are increasingly indistinguishable from the goals of the state. The political and economic systems are subservient to corporate profit. Debate between conventional liberals and conservatives has been replaced by empty political theater and spectacle. Corporations, no matter which politicians are in office, loot the Treasury, escape taxation, push down wages, break unions, dismantle civil society, gut regulation and legal oversight, control information, prosecute endless war and dismantle public institutions and programs that include schools, welfare and Social Security. And elected officials, enriched through our form of legalized corporate bribery, have no intention of halting the process.

The government, by ignoring the rights and needs of ordinary citizens, is jeopardizing its legitimacy. This is dangerous. When a citizenry no longer feels that it can find justice within the organs of power, when it feels that the organs of power are the enemies of freedom and economic advancement, it makes war on those organs. Those of us who are condemned as radicals, idealists and dreamers call for basic reforms that, if enacted, will make peaceful reform possible. But corporate capitalists, now unchecked by state power and dismissive of the popular will, do not see the fires they are igniting. The Supreme Court ruling on our challenge is one more signpost on the road to dystopia.

A ruling elite that accrues for itself this kind of total power, history has shown, eventually uses it.

The Supreme Court has made it abundantly clear, first via Citizens United, then most recently via McCutcheon v. FTC, that corporations are “persons” whose “free speech” must be protected at all costs – including the cost of democracy – while our rights – the rights of living, breathing people, the fundamental right of due process and our fundamental